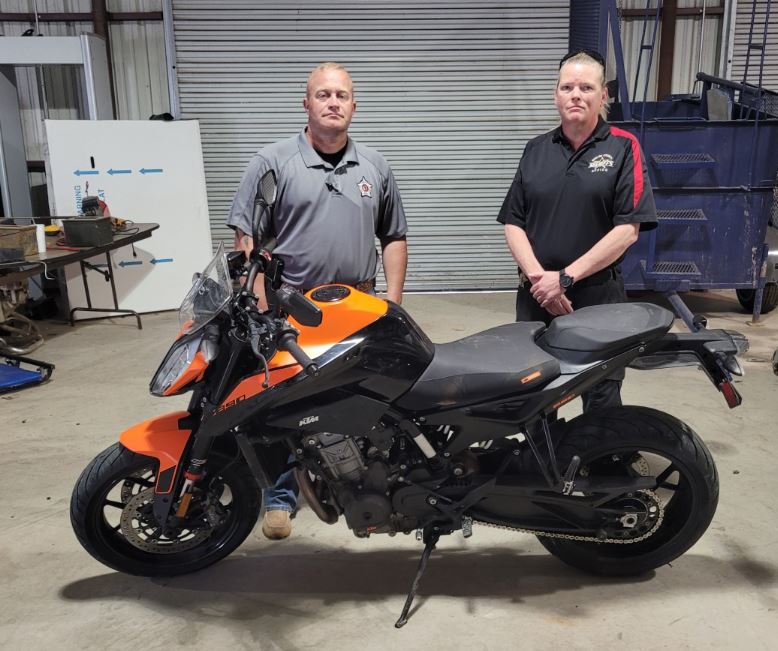 The Shelby County Sheriff’s Office Criminal Investigation Division initiated an investigation on June 8, 2022, that resulted in the recovery of a stolen motorcycle.

During the afternoon of June 8, Investigator Chad Hooper, Investigator Misty Ray, and Constable Precinct 3 Roy Cheatwood began patrolling a specific area between Tenaha and Joaquin looking for a vehicle that was believed to be involved in the burglary of a habitation. The investigators located the vehicle and identified possible suspects.

While most people were winding up from their daily activities and spending time with their families, Investigators Hooper and Ray diligently followed leads, and with the help of patrol deputy Aaron Jones and Constable Cheatwood, recovered the motorcycle less than 24-hours after it was stolen.

“This swift recovery proves that we are working theft cases and we take them seriously,” stated Shelby County Sheriff Kevin W. Windham. “Investigator Hooper and Investigator Ray were on this case from the moment it was reported and they did not stop until it was found. This is the third piece of property these two investigators have recovered and returned to the rightful owner in less than a weeks’ time. This right here shows their dedication to their jobs and this county.”

The Shelby County Sheriff’s Office greatly extends our thanks to the public for their assistance in sharing our press release regarding this case over social media. Thank you, Constable Precinct 4 Taylor Fanguy for your assistance.

The Shelby County Sheriff’s Office is investigating the theft of a 4-wheeler. On or about December...